With its sweet and spicy flavor, apple tea will sooth your soul . Quick, easy and delicious, this recipe will become a favorite in no time. Spice your mornings at work with some Apple Cinnamon Tea.

Apple cinnamon tea recipe is rich in all the classic fall flavors. The sweet apples with the cinnamon and ginger spices gives you precisely what Fall should taste like in a cup.

To make this Apple cinnamon tea , I haven't used any tea leaves just to avoid caffeine and reap the complete benefits.

With only five ingredients and 3 minutes of prep time, this tea is simple to make . This tea comes a way better than store-bought. Cozy up with this Apple cinnamon Tea on a cool, crisp day, it's my promise that you'll love this for sure.

Why you need to make this? Apple cinnamon tea has

2. Fights Cholesterol: The fibre and antioxidant polyphenols present in apples lower the levels of low density lipoprotein (LDL) or bad cholesterol from the blood and, hence, promote fat burn.

3. Boosts Digestion: Soluble fibre is also known to be great for weight loss. A healthy digestive system helps boost digestion because apples have good amounts of soluble fibre in them.

5. Low In Calories: Apples are very low in calories. A standard-sized apple contains about 50 calories per 100 gm So, eating or drinking them in form of teas, apples can help you maintain a low-calorie count. Source : NDTV Food

You need only 5 ingredients to make this cozy apple cinnamon tea.

You may also add tea leaves or tea bags to make this Apple tea. But trust me even without caffeine , this apple tea tastes delicious. Oh Yes , I'm promoting to have a caffeine free tea here to stay healthy !

How to make Apple Cinnamon Tea ?

In a saucepan add sliced apples , ginger, cinnamon stick and water together.

After 30 minutes, turn off the stove and set sauce pan aside. Cover with a lid and let it steep for another 5 to 10 minutes.

Next strain the liquid over a mesh strainer. Gently mash apple with help of spoon to extract its juice.

Once tea is warm enough , add lime juice and honey .

Can I add honey to hot tea ? Honey losses its therapeutic values when exposed to high temperature. Hence its always recommended to add honey to warm tea.

Why was my Tea not flavorful ? If you shorten the simmering time , then flavors might not get infused. Hence its always recommended to simmer on low heat for minimum30 minutes. 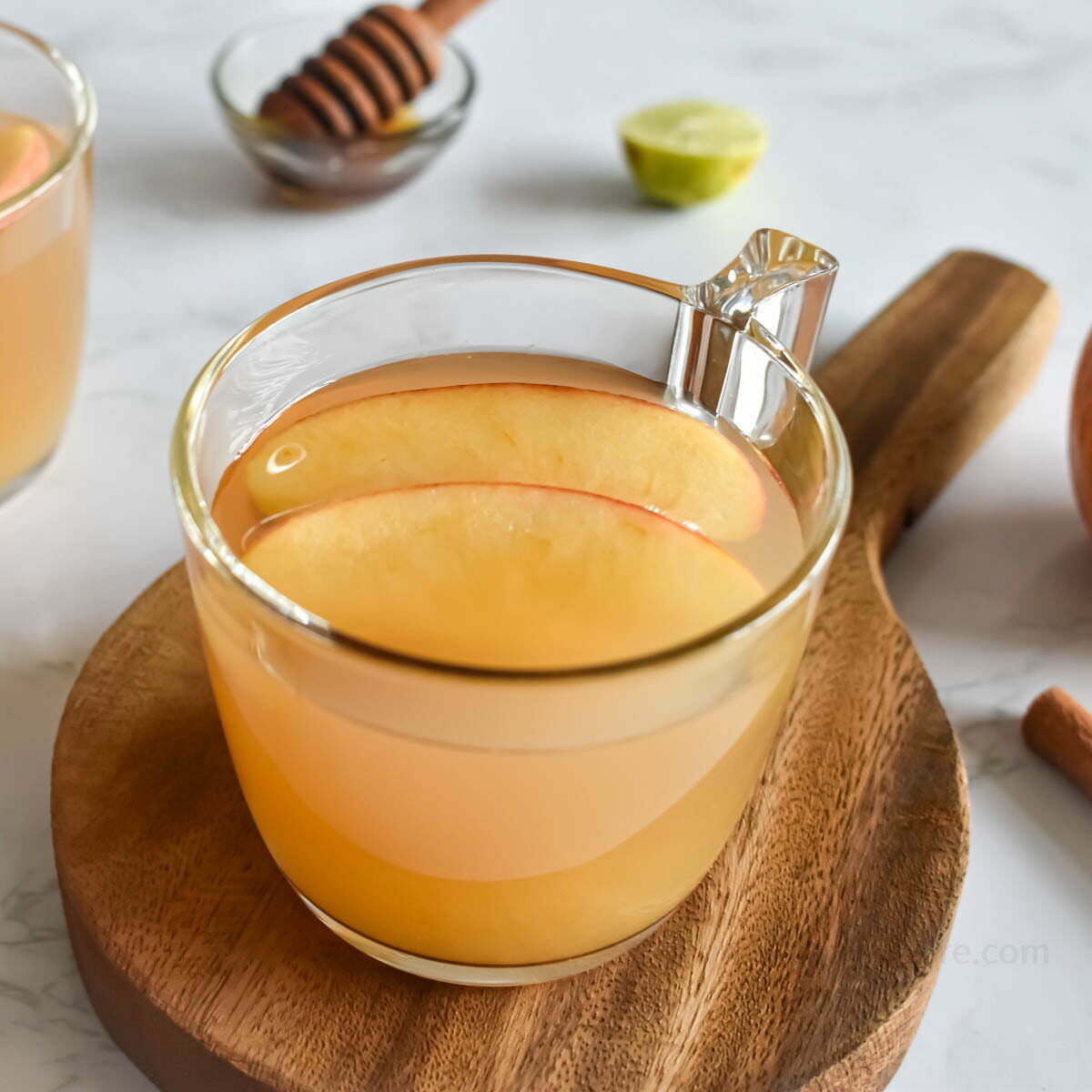 Subscribe to my YouTube ChannelClick here Palate's Desire !
Tried this recipe? I LOVE to seeSnap a photo and mention @palatesdesire